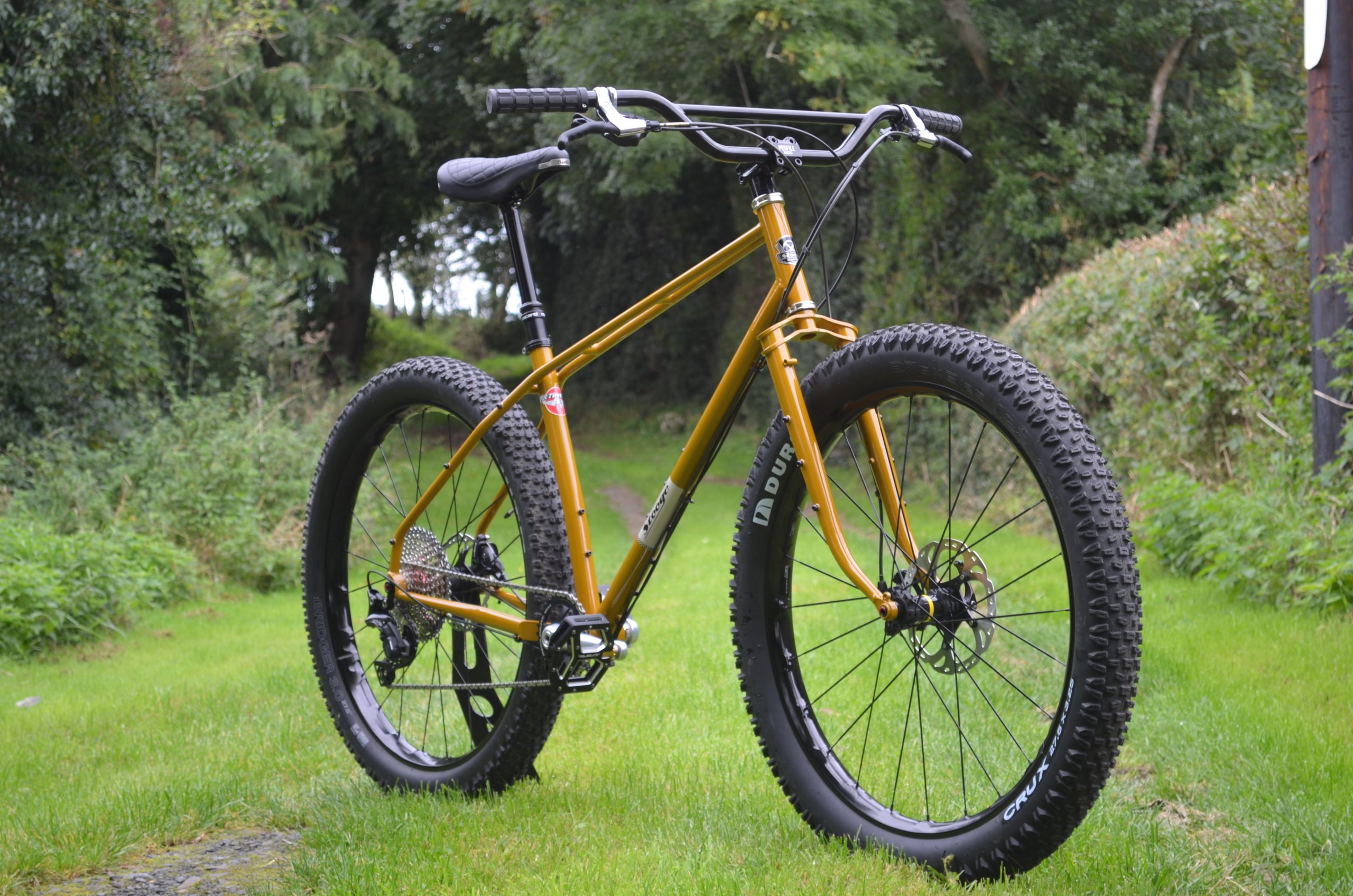 Anyone who grew up in roundabout the same era as me will know the power of imagery that the word SCRAMBLER holds. In the dawn of time, before BMX hit the shores of blighty, we used to call our cow-horned track bikes scramblers, and we didn’t just go riding, we went scrambling. To us it meant riding like a nutter through the mud and rocks, just like the big boys were doing on their scrambler motorcycles. So yep, scrambling is cool, always has been always will be, and now i’ve designed a bike so I can go scrambling all day long with a tent and flagons of ale strapped to my steed, so I don’t even have to go home for my tea! 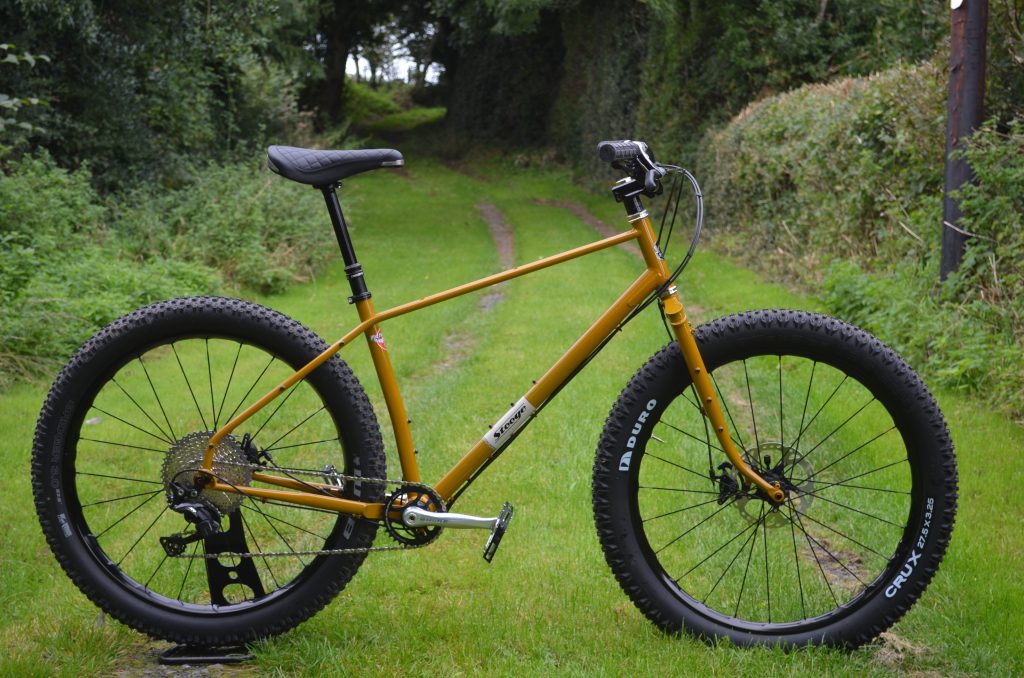 So here’s the lowdown on this beasty. The original Stooge frames accidentally became really popular with bikepackers and adventure riders and I’ve long been asked to make a bike with more bosses and mounts to aid adventures, maybe even a bigger mainframe so two bottles and a bag can fit in there. Back in 2016 I designed an adventure frameset with 29+ wheels and it was all set to go into production, but then of course the Brexit vote happened, the pound crashed, and the rest is history. But that frameset kept on niggling me. A lot happened in the intervening years – the MK3, the Speedball, and then the MK4. The MK4 was a quantum leap forward for Stooge, both in terms of design and how quickly the frames sold through, so it was time to revisit that early design and make it more rad and bring it bang up to date. 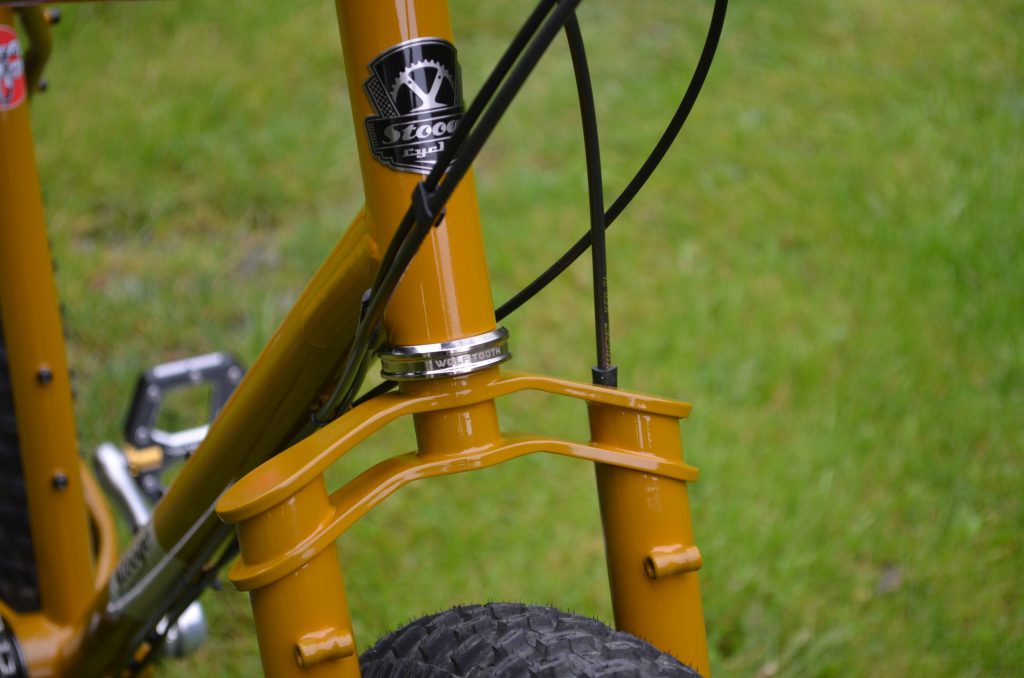 The Scrambler, first and foremost, is a trail shredding rigid bike, but unlike my other frames it comes with all manner of mounts (rack and cage mounts on the biplane fork, triple cage mount x 2 on the downtube, bottle cage on the seat tube, rear rack mount and half rack mount for saddle bag supports). I call it a radventure bike, an adventure bike you can still get rad on, still take around the old BMX track, but still ride into the sunset on in all-day-comfort with Knocking On Heaven’s Door playing in the background. It still has twin tope tubes but there’s room for a bigger bag (talking of which, Wizardworks are coming on board to produce a framebag for this. Hurrah for Wizardworks). 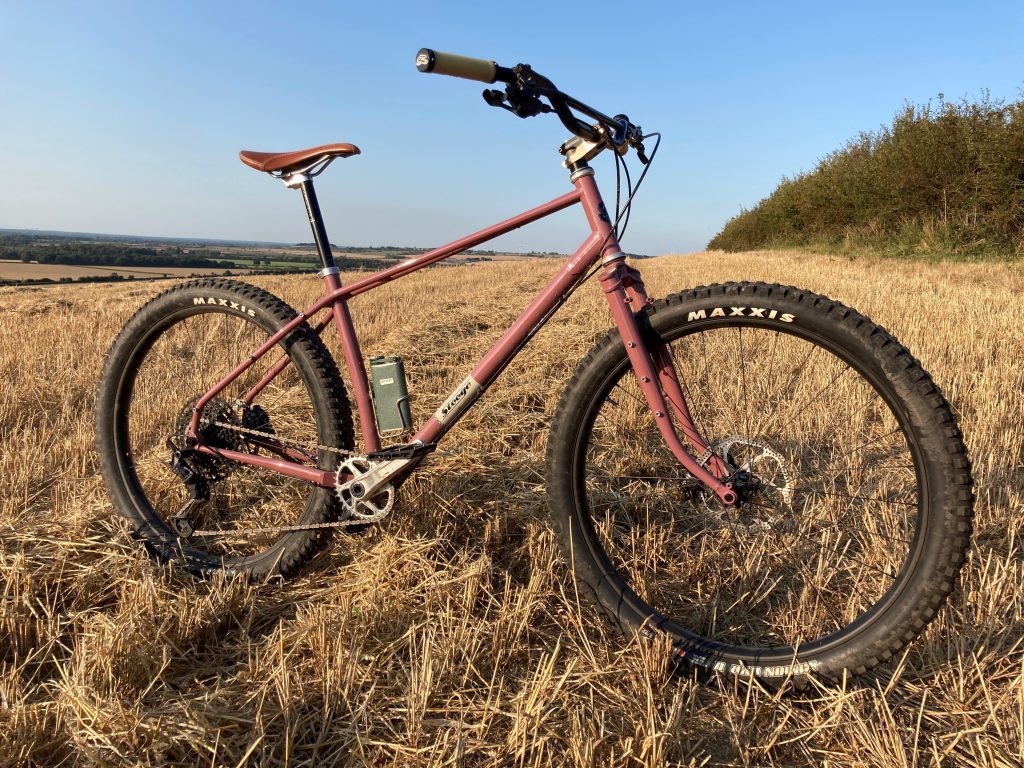 2 sizes this time around, an 18 and a 20. The ETT on both is 610 and 635 respectively. I wanted this bike to be a little shorter than the MK4 for a slightly more upright riding position. Coupled with the short chainstays this will feel really poppy and light on its feet. I’ve also opted for B+ as a primary wheelsize. I love the agility this size offers and missed having a B+ bike in my line-up. The head angle on these is 67 degrees, so fair bit slacker than the earlier frames and the Speedball. I think its going to be a magic number. Of course you can still run 29er on this, and if you do make sure the front tyre is a big as you can get hold of, preferably a Duro Crux (AKA the best front tyre in the world ever).

I’m aiming for a final price of £600 or thereabouts on this, exchange rate depending. If it can be less it will, but it certainly won’t be any more than £625 as an absolute upper limit,

I see the Scrambler being built up with a superfat front tyre, a set of Junker bars and BMX stem, old canvas panniers hanging off the back full of clinking bottles and good times, and then being a dear friend when you’re all on your lonesome pedalling across some barren moorland with a head full of adventure. In short, I think its going to be the best radventure bike in the world and I can’t wait to get my sweaty mitts on it.