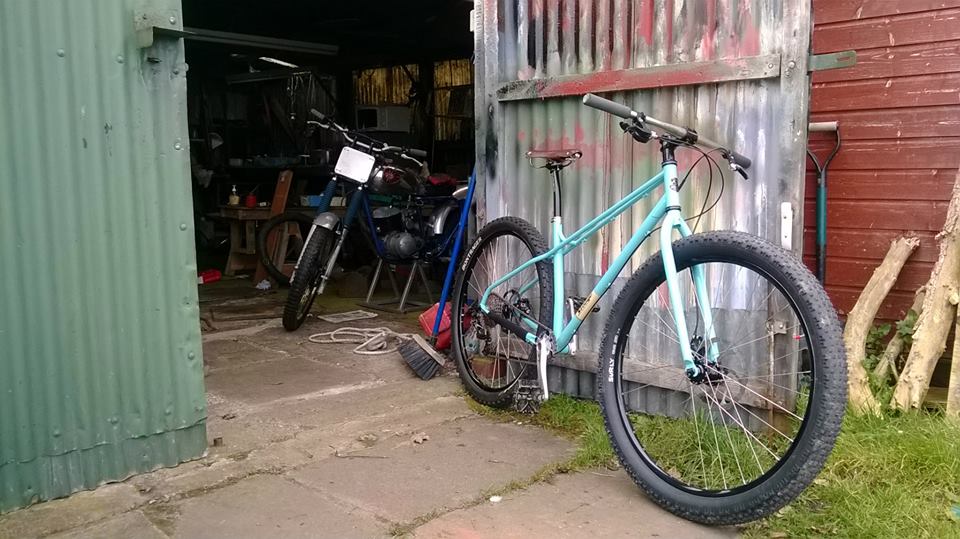 Greetings one and all. I get a fair few e-mails from people asking me which version of a Stooge they own, so I thought it time to jot down all the various details and numbers n things and put them in one place, namely HERE! This list type thing will help you to understand the differences between the various MKs and might answer a few questions that you didn’t know you had. So here goes….

November 2013. The one and only protoype Stooge. This was the first bike I designed and luckily it worked out well. All the geometry was in place, but this one had a regular BB, cable routing that was far from perfect and no braces between the top tubes, so it was a little noodly. Currently lives in a box in the shed. Should probably be built up again and put somewhere nice 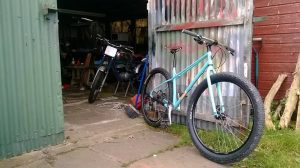 June 2014. The first and only production run of MK1 frames arrived. This was split into – 5 x single speed specific framesets in Stooge Blue (I have no idea where these have ended up, but I wish i’d kept one). 20 x Plum Crazy purple, and 75 x Stooge Blue, so 100 frames in total. The geometry on the MK1 was specifically designed around a 29×3 front/29×2.3 rear combo. Any other set up and you’re missing out. It was only available in the one size, 18″ with an ETT of 597mm.

Features that denote a MK1 – cable routing underneath the RH top tube. Cable stop on the rear of the seat tube. The chainstays are 435mm but the rear tyre clearance is quite limited on this one, though perfect for what it was designed around. I still think of this one as the purists Stooge, it existed with no outside influence from trends and fads, I also had no idea what I was doing so was bloody lucky that they actually sold. 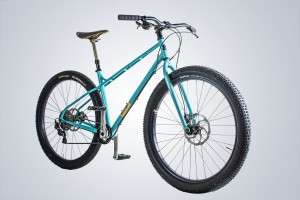 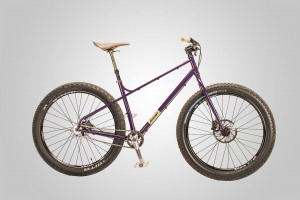 August 2015. Production run of 100 MK2 framesets. This was broken down into 3 colourways – 30 x Bleached Olive, 30 x Radberry magenta and 40 x Stooge Blue. 5 of the Stooge Blue framesets were later repainted in gloss black with chrome decals. The geometry on this one is fundamentally the same as the MK1, but the clearance on the rear was altered around 27.5 x 3″ tyres. The chainstays are also longer at 445mm, I worried about this at the time, until I rode one and then I was most happy. The MK2 lost the top tube cable routing and the cable stop on the seat tube and was all the better for it, the age of 1X had arrived. The MK2 also used heavier gauge tubing on the downtube and top tubes and is a little heavier than the MK1 because of it. 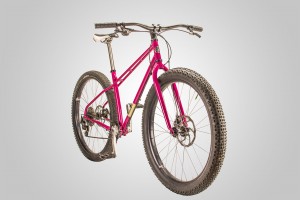 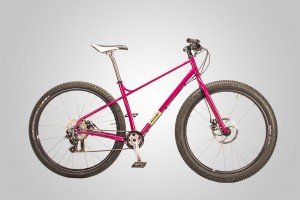 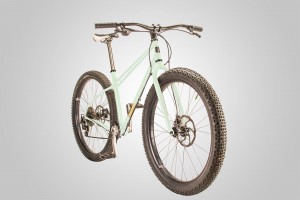 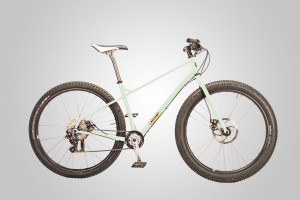 There were a lot of changes introduced for the MK3, the most obvious being the introduction of fatter tubing in line with the titanium frames. Other changes were a 44mm head tube and tapered steel forks. Geometry remained the same apart from the chainstays which were reduced to 430mm. The MK3 is designed primarily around B+ and is the poppiest and most agile of the Stooges, though visually it lost that lovely retro vibe of the earlier framesets. One unforeseen downside of the fatter tubes is that it is also noticeably heavier than the MKs 1 and 2 and loses a certain amount of the natural steel ‘spring’, but the supreme handling more than makes up for it. This is a bike that rides light.  The ETT on the 18 is 597mm, and on the 20 its 630mm.

The MK3 was also stung horribly by the Brexit vote, between placing the order and them arriving a vast proportion of our country had decided they wanted ‘out’ and sent the pound plummeting against the dollar. Things would never be the same in the bike industry after that, what felt like fun suddenly felt like an issue of survival. Interestingly, or maybe not, I had another frameset lined up for production alongside the MK3 and it was beauty – a very simple 29+ bikepacking frameset with biplane forks and twin top tubes, but more classically double-diamond. I was gutted to have to shelve this and its now sadly lost to the mists of time. 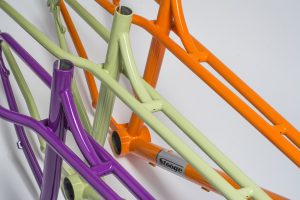 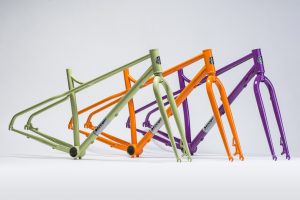 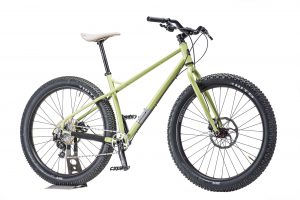 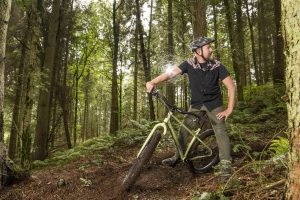 June 2018. 50 Steel Speedball framesets in 2 colours – Duster Blue and Moby Grape. The Speedball shares a lot of the geometry with the MKs 1 thru 3 but is obviously designed around 29+. The simple idea was that it should ride and handle like a Stooge but it should achieve that agility with 29+. Although the geometry is more or less the same, the big wheels give it an air of grace, and thus I tend to pitch this as the one to go for if you’re planning to travel, bikepack or simply head out for longer days in the hills. Its daft of me really, because the Speedball is  an absolute rocket ship that can be ridden down or around anything.

In February 2019 I added the option of a steel biplane fork to the Speedball with triple cage mounts and 57mm offset to increase the agility slightly when carrying loads. 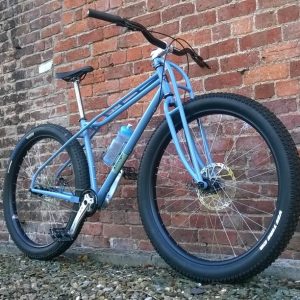 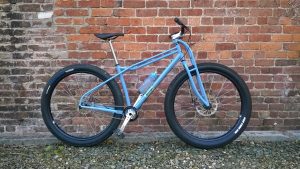 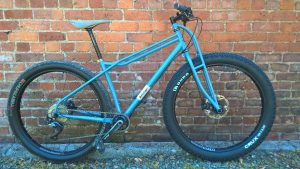 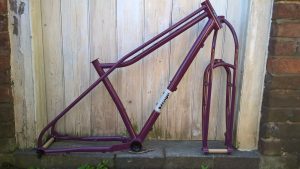 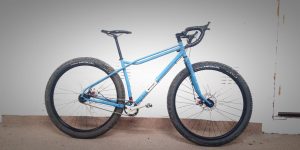 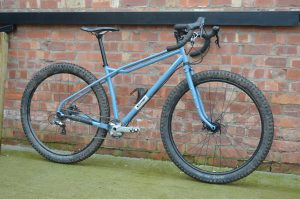 So that’s everything so far, obviously when the MK4 arrives i’ll be updating this page with photos and all the info. Its been quite a trip, here’s to a few more years of making it work. At the outset I kinda decided that I would do zero marketing and try and float this ship through word of mouth alone, so thank you to everyone that climbed aboard and helped make it happen.