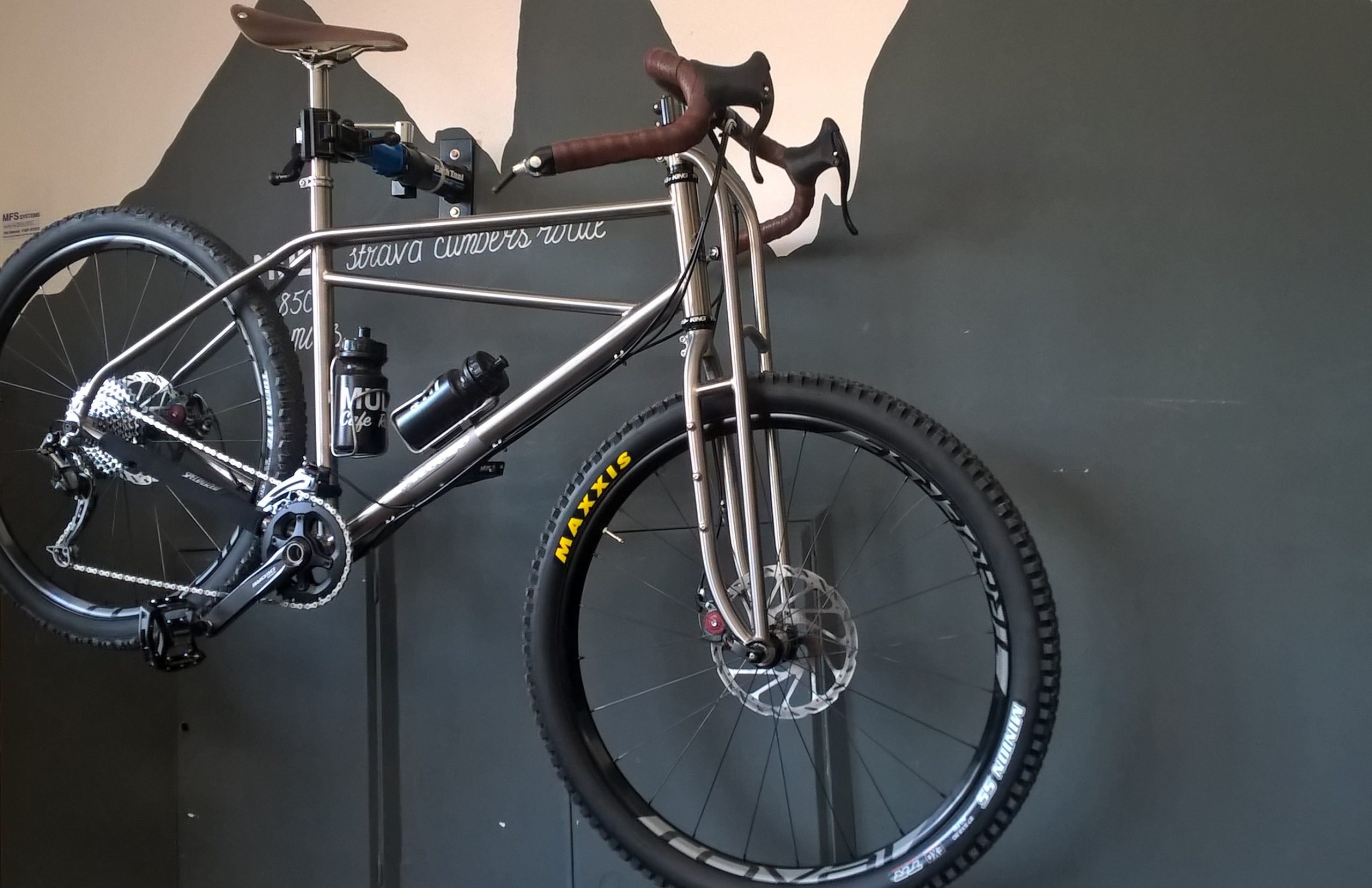 …when really it should be chucking a groove to Gang of Four’s ‘I found that essence rare’.

But the Gravel Bastard IS here and it rocks like a b-£$”*d.  Here’s some thoughts on it and why i made it etc. The first thing to point out is that i’m using the term ‘gravel’ ironically, this is a whole load more than that, and i suppose in some ways a little bit less, but put simply, its no Specialized Diverge, and thank god for that. I had a Diverge once, for less than a week, and i’ve watched this gravel phenomena unfold the same way i watched the fat bike mass exploitation/trend thing unfold, and basically it seems like this – as everyone’s jumped on the bandwagon they’ve taken their road and cross bike and added disc brakes and a little more tyre clearance and called them GRAVEL!!  Its all pretty one-dimensional and although a lot of these bikes are fine, they’re hardly ram raiding all terrain machines. There’s some decent, superfast machines in the pack but… yaawn.

So the Gravel Bastard and its more sensible sibling The Dirt Tracker both run with my idea that runs through the whole Stooge range, and that’s about unweighting the hands and getting the riders weight a little further back in the mix in relation to the front wheel. 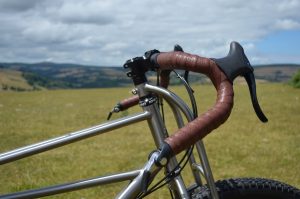 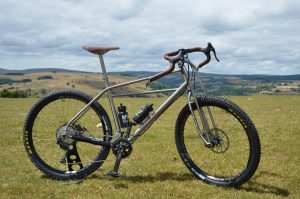 Traditionally a drop bar bike would have a short top tube to make up for the hoods on bars, coupled with a low front end and long stem, and although aero and fast, it doesn’t make for an ideal position when you’re hurtling along a rutted track. I normally ride a 56cm road bike and something like a 570 top tube, so on this i stretched the top tube to 595 so it could be run with a short 50mm stem. The headangle is also a lot slacker than the norm at 69 degrees, so the wheel is out in front, digging into the corners instead of threatening to tuck under and throw you off. The fork offset has also been increased from 44mm to 60mm giving a low trail figure of 64mm, how this translates is amazing agility, it’ll turn on a dime and yet its super stable at speed.  You can do endos on it and front wheel hops,  you can also descend on it like a Stooge with your weight back and the front nice and light. The chainstays are also a lot shorter than the norm at 420mm and the BB is lower at 75mm. All this adds up to a bike that is really planted but also really nimble and confidence inspiring. Looking down at the front wheel is freaky at first, it seems a long way away, both down and out in front, but it soon starts to make a lot of sense and when you hit the dirt you know its the only way it should be. The other upshot is that the riding position is damned comfortable, its no sit up and beg, and you can still hit the drops and put the power down, but its refreshingly upright compared to most.

Truss forks on a gravel bike, though???  And that tank tube??? 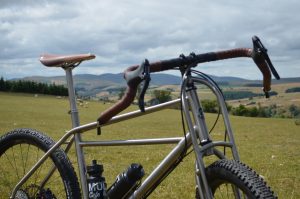 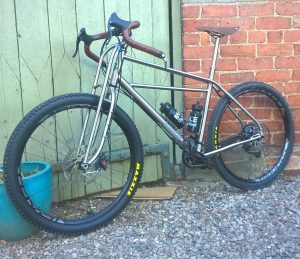 But why the hell not, life’s too short for things to be boring. And the truss forks are actually there out of necessity, there aren’t any 60mm offset forks available that i know of for such a job, plus the steering is really precise with them, double plus they have triple cage mounts on them. The other thing to note is that i made this bike for myself and i wanted to push the envelope and challenge the norm, i’m dead chuffed with how its worked out. It was also originally intended to have 700c wheels with 45C tyres but as soon as i rode it i realised it needed some proper rubber, so it now runs 27×2.1 on the back and 2.3 on the front – just perfect!  So the daft thing is i ended up not making a gravel bike at all, i made a drop bar MTB, like a Fargo on acid.   Oh well, back to the drawing board. But before then i have a lot of miles to put under this one – black run at Llandegla on the weekend, try doing that on a Diverge – and then an adventure or two, keep riding it until i’ve got it nailed.

Can i buy one? Yes you can, just give me a shout on the contact page. Price will be £1800 for frame and fork. Sizing will be discussed so that no matter how tall or otherwise you are you’ll end up with the same set up as on mine.

In steel?  Not this time, but the Dirt Tracker will be along in due course and that’ll be a proper gravel bike for 45mm rubber but with more or less the same geometry as this.

Can i swap one for my wife?  Er, no thanks, i already have one and one’s enough thank you very much.

Note on the groupset – i’ve gone all bastardy and done a proper mix n match job, to the point this is designed around MTB standards rather than road. You could run a road disc groupset on this fine, but i’ve used Avid BB7 mountain brakes with 203 and 185 rotors matched the Tektro V-brake levers. 10 speed Dura Ace brifters are matched to a Deore rear mech (non Dynasis) and a Deore sideswing front mech. The chainset is a new Deore double with 38/28 rings.