I have a confession to make!  I’ve built so many new bikes in the last twelve months that I’ve completely failed to spend a proper amount of time on the CK Flyer. The MK4 is getting top honours at the moment as my go to bike, but the Gravel Bastard has also seen many hours of riding. It covers ground so damn quickly compared to my big rubber machines that its hard not to automatically pick it from the shed. It handles MTB trails just fine and is the definition of ‘all day comfort’, so in many ways its the perfect bike.

So the CK Flyer was getting ignored. Shame on me. But ever since I’ve built it I’ve had this itch that it would make a great dirt drop bike in the very traditional sense – big tall stem, proper old-skool Nitto dirt drops. I also had a feeling that if I set it up like this it would actually become my go-to bike for longer off road jaunts.

I love dirt drops! My interest was first engaged when a friend bought a first gen Salsa Fargo many years ago with a set of early Woodchippers. I thought that bike was fantastic and it kinda lit a spark that made me question everything I thought I knew. On one level it made no sense, and yet the idea of handicapping yourself (as I thought at the time) seemed really appealing. Same with rigid bikes, I guess, but i’m completely drawn to the idea of becoming a better, more satisfied rider by ditching the bells and whistles of modern mountain bikes.

This may run the risk of sounding twatty, but I think dirt drops are something that you have to learn about and experiment with before you actually begin to understand and eventually work out how they need to be set up. There’s still a lot of confusion out there, especially with the advent of the Gravel bar, which although flared is a totally different beast. A fair few gravel bikes are actually sold with dirt drops rather than gravel bars so no favours are being done to the bike and the bar. But here’s a few things that I think I’ve learnt on the way, and feel free to disagree, but i’m fairly convinced i’m right… 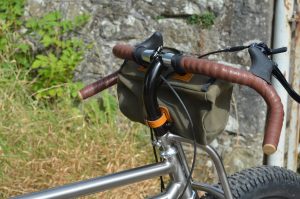 The Velo Orange Cigne stem does a good job of getting your bars up where you need them.

So with all this in mind I decided to revamp the Flyer and turn it into a drop bar MTB. And all of a sudden its the bike I want to ride everywhere all of the time. The riding position is spot on perfect, it looks amazing, it rides like a supertruck on steroids, and you get the feeling it would carry you safely to the end of the world and back. The stem is a Velo Orange Cigne that I had lying around with some 14cm of rise, bonkers, but on this bike it looks just so. The bars are Nitto Dirt Drops, the RM3. The quality of Nitto stuff is amazing, and these bars are certainly the oldest of skools in their design, but so they should be, because they were pretty much the first.  The design is much copied (On One Midge, Sonder) and out of all the dirt drops this would be the absolute worst when set up on a gravel bike, but set up properly they make complete sense.

So there we are, onwards and upwards, and long live the dirt drop. If you’re curious, grab a cheap second hand bike and give it a go, there’s a lot of fun to be had in them there drops.